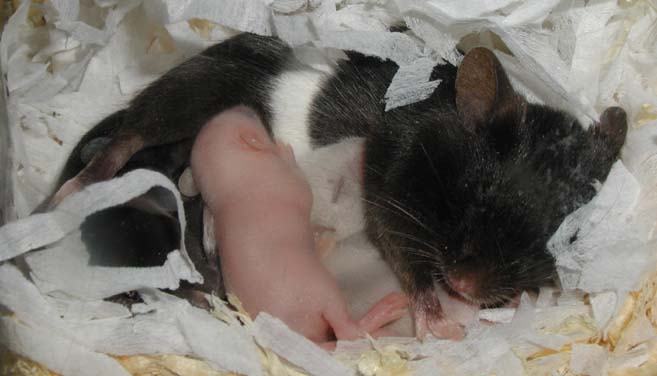 Parents of newborns can likely sympathize with the diametrically opposed behaviors that mice and rats display towards young pups. On one hand, there is the urge to care for the pups by nesting with and grooming them. On the other hand, there is a darker urge: to go on the attack.

For laboratory mice, the urge that wins out is largely determined by both sex and mating status. Both virgin and mated adult females primarily care for young with very little attacking. This is true for males that have mated, too- especially if it has been about three weeks since they mated, which coincides with the gestation period for mice. Virgin males, however, are more moved by the darker urges- and with solid evolutionary reason. If they haven’t mated, then there is no possibility that the pups are theirs.

At Harvard University, Zheng Wu and his colleagues set out to find the neural circuits that control these behaviors. Their results were published this week in the journal Nature.

Mice, like many other species, use the vomeronasal organ to sense pheromones given off by others of their species, and pheromones can be a powerful cue in motivating social behaviors.  Wu and his colleagues tested the idea that these pheromonal inputs could be triggering the pup-directed aggression in virgin males.  They compared virgin males with intact, healthy vomeronasal organs to males who had impaired vomeronasal function thanks to a genetic mutation in a key pheromone receptor. Amazingly, they found that the virgin males who couldn’t smell the pheromones were not aggressive toward pups, and actually started to build nests and care for them.

The researchers next wanted to find the neural populations that could underlie parenting behaviors. They identified a set of neurons in the medial preoptic area that became active in females and sexually experienced males after they started parenting. These same neurons stayed silent in virgin males. The medial preoptic area is a part of the hypothalamus, which is one of the areas that the vomeronasal organ sends information to.

Although the medial preoptic area is small, it still contain many different types of cells. Which ones were responsible for getting the mice to act like parents? To answer this question, the scientist looked at the types of neurotransmitters made by cells in the preoptic area, and concluded that the cells active during parenting overlapped the most with cells that make a small neurotrasmitter known as Galanin.

Wu and colleagues investigated the role of these neurons using two opposing manipulations.

In the first set of experiments, they destroyed these neurons using modern genetic targeting tools. When they destroyed the cells in virgin females, they abruptly switched from caring for pups to attacking them. This suggesting that at least for  virgin females, these neurons act as the switch between these two opposing behaviors.  For sexually experienced males and females, loss of the galanin-positive neurons only resulted in a loss of parenting behaviors without an increase in aggression.

In mated male fathers, the same light-induced activity in the neurons caused a marked increase in grooming of the pups.

The authors concluded that the neural circuits to care for or attack young pups co-exist simultaneously in the mouse brain, and which circuit is active depends largely on a social context – working through a set of hypothalamic neurons.

Parental care is required for newborns to survive in many species. This is especially true for mammals, because our young are born relatively helpless and require adult intervention to move and find food.  Between species,  it varies widely how much of the care is provided by the mother or the father.  This work demonstrates that both sexes have the neuronal architecture necessary for effective parenting.

There is good reason to believe that humans have a similar set of neurons controlling parenting behaviors, because other neurons in the medial preoptic area have been shown to have conserved functions across mammal species.  This work sets the stage to investigate other fascinating questions, such as whether the function of these neurons is disrupted in postpartum depression.